Sorry for the short notice but we have had to swap Kelly’s show date with Louise Adams’ to allow Louise time to recover from illness.  We hope you can come along to see both of these great shows. Louise will now perform on 15 August and Kelly on 18 July. Livestream and camping tickets also available.

EASING OF COVID RESTRICTIONS MEAN WE CAN NOW SEAT TO 50% CAPACITY! BE QUICK.

Click for On-Line or In-Person Tix to Kelly Brouhaha

Thanks to the generosity of the South Australian Government via the Music Development Office, the Goyder Council and a wonderfully supportive group of sponsors who just flat out LOVE what we do, The Barn at Wombat Flat is thrilled to present one of SA’s best performers….Kelly Brouhaha!

We know that Covid-19 has crippled so many businesses like ours and has, in particular, affected the artists we love to bring to you in our usual live show, full house format. We have re-invested and re-equipped to bring you high quality video and sound for this, our second livestream format show where Kelly will perform for a small group (to comply with restrictions) of invited guests.

We hope you will join us for this Facebook live event on our page @thebarnwombatflat. For us, producing these shows has been conditional on being able to pay our artists, sound and video tech personnel as we would have for a live show and we thank our sponsors for getting us most of the way down that track. If you are able to support us in that endeavour by purchasing a ticket for $10+bf if you can, it would mean the world to us. If you’re not in a position to do that we absolutely understand and insist that you please, please watch the performance for free anyway and share as widely as you can. That helps us by keeping The Barn flag waving until better times and, of course, is a boost to our performers. Thanks in advance!

As often happens in rural Australia, internet performance can be variable! If for any reason the live performance broadcast is interrupted we will upload directly to our Facebook page ASAP. 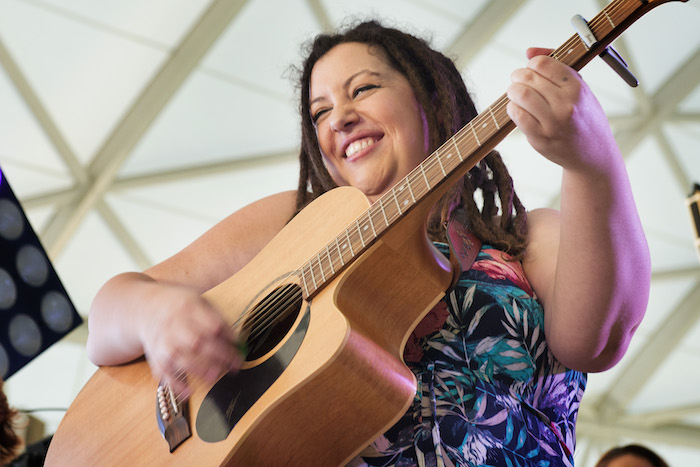 “She’s known for having an extraordinarily rare voice” – CLARE BOWDITCH

Shortlisted for the Americana Music Prize in 2018, Kelly Brouhaha’s brand of americana soul is as real as it gets. The South Australian songwriter & multi-instrumentalist spends most of the year around a campfire, travelling in her 1992 Toyota Hiace Van called “Pamela Vanderson”.

Her debut self titled album tells the story after leaving her marriage and mortgage behind in the pursuit of happiness. The single of the same name, co-written with Aleyce Simmonds is a big, ballsy, freedom-esque blues which captures the heart of the Australian landscape and the lure of off-grid living.

Choosing to pursue the road less travelled after learning of her father’s althzeimers diagnosis – this album captures heartbreak and grief in a way that leaves you breathless. A diverse first offering from an artist you absolutely need to hear.

You cannot put her unique style into a box.
From big blues, to soulful country, it is real and raw and vulnerable.

After spending many years living  in the red sands of outback South Australia Jimmybay decided to put  music to his long told campfire stories and bush poetry. He left South Australia and travelled to the tropical north, taking  only his suitcase kick-drum filled with his possessions and carrying his guitar. He Slept in the long grass on the outskirts of Darwin and walked into town each day to busk on the streets.

This was the beginning of what would evolve into Jimmybay performing in Festivals across Australia, including: Illawarra Folk Festival, Deep South Blues and Roots and the National Folk Festival

Blues-folk-alt country vagabond Jimmybay has been travelling from town to town in his beat up kombi van for the past five years.  In that time this multi-instrumentalist has captured audiences with his honest storytelling style and mesmerising live performances.  Drawing inspiration from his own experiences and stories told by other travellers.

Utilising guitar, harmonica and his suitcase kickdrum, his offbeat character and intuitive songwriting have combined to create a unique live show of genuine storytelling, emotive lyrics and a quirky charismatic stage presence.

NO BYO FOOD OR ALCOHOL PLEASE We will have the wonderful Barossa Street Food van here along with our partners in wine….Ricca Terra Farms. Baked goods from Eudunda Bakery too!